Shown above is RW SGC Snopride Jungle Jazz News of Cazpurr.  I had lots of fun showing Jungle Jazz!

2017-2018 International Winner Cazpurr Takoda shown below with his trophies.


​RW SGC Cazpurr All That Jazz one of the few Female Supreme's. Shown above. It is not easy to achieve a female supreme in a Stud/Male dominate show world.  Jazz is soon to be honored as outstanding queen having five known show kittens achieving at least a grand champion in the show rings.  Great Job my special girl! Jazz is 14 years old shown below.  I will be breeding her granddaughter "Jazzy" in 2018. 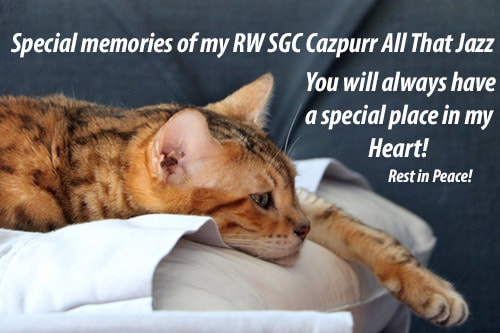 Shown above is Grand champion Cazpurr Jazzman of Bengalislandcat.  My special thanks to Donna Haynes for taking the time to show this beautiful boy in the rings.  I am so proud of his accomplishments.  Jazzman produced a International Winner in 2013 along with many other show achievements. 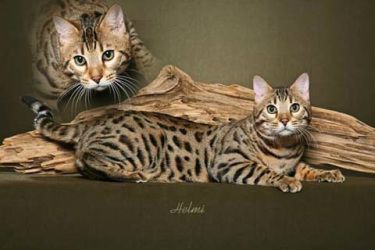 Welcome RW SGC Snopride JungleJazz News of Cazpurr.  Meet my new show boy who took the rings 2014.  JungleJazz's parents are:  Sire:  Snopride Heres Good News and his dam is:  CH Cazpurr Jazzy London who's mother is RW SGC Cazpurr All That Jazz.  It looks like three generations of splendor in this boys pedigree.  What can I say just look at those whisker pads, bright rounded big eyes, strong chin and so much more to mention.   I received Jungle Jazz's Supreme Grand Championship in Just 4 shows!  I am so proud of him!!!!  LD Johnson
Meet Cazpurr Captain Nemo of Atlantica... coming up through the show
ranks for the new 2014 show season!  Owned by Wayne and Brandy Little

Meet  RW QGC Cazpurr Power Play of ToHearts also a Texas favorite! AKA Chilli A Cazpurr All That Jazz Son.  He won the honor of being on the logo for the On Safai Cat show in Ohio that year. Congrats Cazpurr Chili.

CH Cazpurr Sinbad of Destination Bengals
New and up coming show male in 2012.  Congrates Terri Payne and Aaron Butler on your beautiful male and thank you so much for the beautiful framed picture you sent to me on Sinbad and his Show Achievements.  It brought tears to my eyes to receive it.  How very thoughtful you both are.

QGC Goldspurr Wildcard of Cazpurr  my sweet boy! Gorgeous Aqua eyes.  He is now is a loving pet living out the good life. 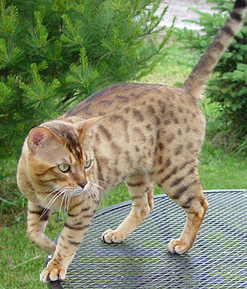 QGC Gateways Blazin Spots of Cazpurr.  My very first show titled cat.  I am still so very proud of my boy and each and everyone one of my cats.  It takes a lot of hard work breeding and showing cats that many people just don't realize.  However, I have meet alot of people and have had the honor of meeting some very good friends along the way.

These are just a few of the Cazpurr cats that have done well at the TICA and ACFA show rings in the past show years.   I will still continue to show but not as often as I have in the past due to HCM  and PK Testing and the over-welming prices that it now costs to raise our cats in today's society.

Thank you all for looking and I hope my site will be a nice place to go to look at our beautiful bengals.
For more fun with Cat shows- See Our Videos!!